The Sum of All Fears [PC Game]

The Sum of All Fears [PC Game] added to cart. Only one available in stock 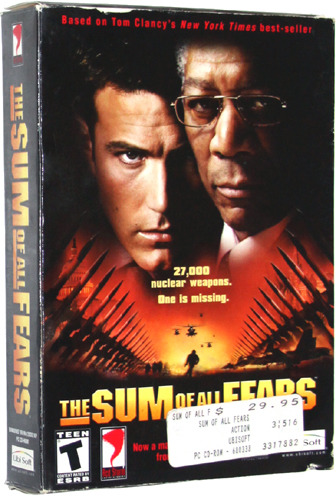 Developed by: Red Storm Entertainment - Ubisoft (2002) - Squad-Based Shooter - Rated: Teen
Few modern authors have had their stories so successfully translated to multiple forms of entertainment media as Tom Clancy. While his best-selling novels have inspired blockbuster movies, they have also set the stage for the innovative and influential line of Rainbow Six squad tactics first-person shooters. Based on the 1991 novel and released in time with the 2002 feature film, Red Storm's Sum of All Fears continues the team-based action gaming in Clancy's techno-thriller world.
An unthinkable yet believable attack brings true disaster to the United States of America, threatening the very foundation of the country. Gamers play as part of an elite three-soldier hostage rescue team to stop powerful conspirators before it's too late. The game boasts state-of-the-art graphics and physics, on par with 2001's lauded Ghost Recon, with tense, close-quarters gameplay in the established style of the Rainbow Six franchise.
From the Manufacturer: The Sum Of All Fears games will be based on events from both Tom Clancy's novel and Paramount Pictures' movie, immersing players in the middle of a high-stakes adventure as members of an FBI elite hostage rescue team reassigned to track down the conspirators of a major plot against the United States. Players can choose to play as part of a three-player team or up to 36 players can join the multiplayer action on the ubi.com gaming portal as well as the internet. The game takes place in a number of modern day locations, including West Virginia, the Middle East, and South Africa, and allows
players to follow the story of The Sum Of All Fears via rendered cinematics depicting vital plot points from the novel and movie.
Special Features: The 11 missions that take place in real world locations; Intense, Competitive and Cooperative multiplayer support including solo team adversarial play, last man standing, capture the flag and sharpshooter modes; Easy to use pre mission interface that allows players to minimize set up time and detail management while allowing quick access to gameplay action.
Buy For: $9.99 - $9.99
Condition: [LIKE NEW] "US Retail" Mini boxed copy, 100% complete & in mint condition
Availability: Usually Ships Within 24 to 48 Hours
Eligible for FREE tracking & delivery confirmation