The Dukes of Hazzard: Racing for Home [PC Game] The Dukes of Hazzard: Racing for Home [PC Game] added to cart. Only one available in stock 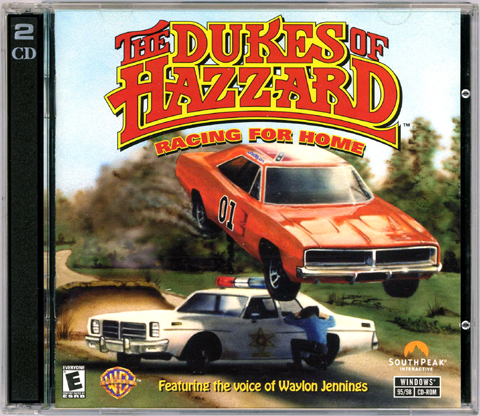 Yee-haw! Strap on those seatbelts and prepare yourself for a wild ride -- Dukes of Hazzard: Racing for Home features full-throttle racing across the dusty trails of Hazzard County. While outrunning the authorities as either Luke or Bo Duke, you'll complete a series of missions (27 in all) such as taking mortgage payments to the bank, rescuing Uncle Jesse from no-good criminals, and saving Daisy from the vile clutches of unknown kidnappers. The game's overall story leads to the ultimate goal of thwarting Black Jack Perril.
Before jumping into the driver's seat, there are a few things you should know about Hazzard County. This isn't a Sunday drive to grandma's house. Armed with high-octane vehicles you'll demolish roadblocks, launch over rivers, and blaze through gravel and dirt terrain. Vehicles include tow trucks and pickup trucks, patrol cars, the infamous General Lee, the Double Zero, and Boss Hogg's prized Gray Ghost; all the important vehicles driven by the characters in the live-action television series.
Developed by Sinister Games, Dukes of Hazzard: Racing for Home features celebrity voice acting courtesy of Tom Wopat, James Best, Sonny Shroyer, Ben James, and Waylon Jennings -- all from the Dukes of Hazzard television series. In addition to three difficulty settings (Easy, Tuff, and Hard), the soundtrack features country rockers The Tractors. There are also four camera views including an internal first-person viewpoint and multiple third-person chase angles.
Buy For: $29.99 - $29.99
Condition: [LIKE NEW] "US Retail" JEWEL CASE EDITION: 100% complete with Manual
Availability: Usually Ships Within 24 to 48 Hours
Eligible for FREE tracking & delivery confirmation