The Bard's Tale [PC Game] added to cart. Only one available in stock 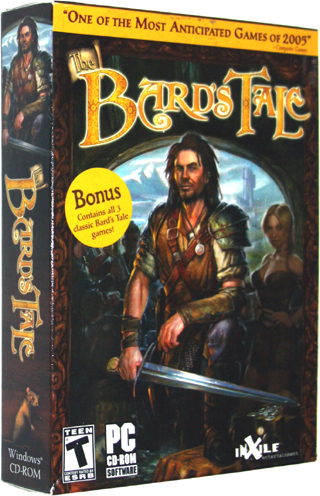 Forget chivalry. Never mind saving the world. Just say "no" to noblesse oblige. Players enter 2005's with refreshingly simple motivations that the often underrepresented everyman adventurer can really relate to -- "coins and cleavage." In the role of the opportunistic, smart-mouthed, somewhat pompously disaffected himself, players embark on a humorous, action-oriented misadventure through a classic medieval fantasy realm, based on the fondly remembered 1985 home computer game of the same title. Like the landmark original, this latter-day was produced by RPG luminary , and it is the first release from his studio.

The 3D game world is viewed from a top-down perspective, reminiscent of , , or in particular, ' ; was built on the engine. Players guide through the large world, exploring new areas and always on the lookout for a free meal or a "soft place to rest his head." While he is skilled enough with his sword, 's true talent is in his voice. He can learn to use his special musical powers to summon a variety of able-bodied creatures that will follow along and help him in combat.

In spite of all the hacking and slashing that ensues, there is a considerable amount of real role-playing in -- not just stat-maxing and attribute improvements, but truly player-directed character development that influences the story being told. The game features a "Snarky/Nice" conversation system that allows players to choose the tone takes when speaking to different NPCs. Obviously, this can have a significant effect on their responses. Because the plot offers so many choices, with so many possible results, players will have to adventure through the game multiple times to unlock all its secrets and see everything it has to offer.?