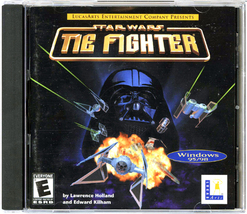 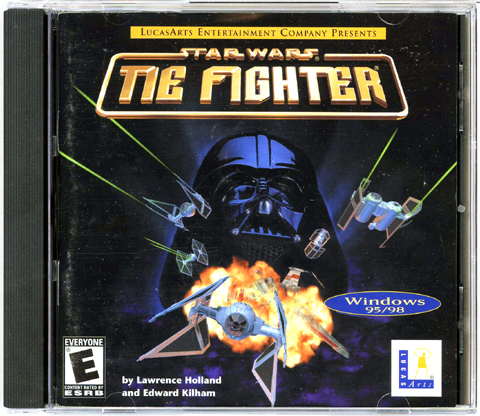 In 1994, Star Wars: TIE Fighter (the sequel to Star Wars: X-Wing) satisfied the gaming needs of sci-fi and flight simulator fans alike. A year later, this CD-ROM version of the game was released, featuring spruced-up sound and graphics when compared to the five 3.5-inch disks making up the original. Also, the Defender of the Empire and Enemies of the Empire expansion campaigns were added to total over 100 missions for you to embark upon in the name of the Galactic Empire.
As with its initial release, TIE Fighter seats you in the cockpit of various Imperial ships to fly demanding missions against space pirates and the Rebel Alliance. A true space simulation, you can move your ship in any direction, even pulling back on the controls to soar over a pursuing Rebel vessel as you prepare to blast it into oblivion. Taking advantage of the full 360-degree motion is no problem once you get the feel for the game.
Set in the environment established in the Star Wars trilogy, you fly against space vehicles shown in the movie, such as X-wings, A-wings, Y-wings, and Corellian vessels similar to the Millennium Falcon. With a variety of weapons, you complete objectives and return to the hanger to be briefed on another. As the game progresses, you receive bigger and better ships to fly, along with prestigious medals and the eventual chance to serve in the Emperor's personal fleet. Also, view cut-scenes -- even some new ones -- as a story set between The Empire Strikes Back and Return of the Jedi develops between each mission.
TIE Fighter closely resembles X-Wing in gameplay. However, the missions allow for a much different challenge and provide you with a look at what the bad guys are doing -- and offers you a chance to be a bad guy yourself!
Buy For: $14.99 - $14.99
Condition: [LIKE NEW] "US Retail" JEWEL CASE EDITION: 100% complete with Manual
Availability: Usually Ships Within 24 to 48 Hours
Eligible for FREE tracking & delivery confirmation