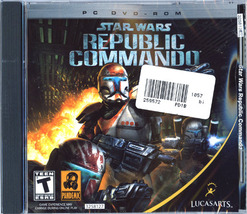 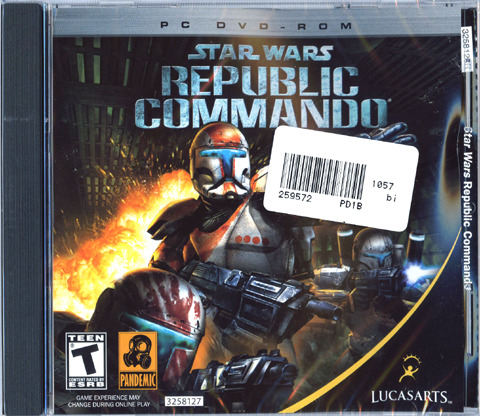 Star Wars: Republic Commando is a squad-based shooter played from a first-person perspective. Taking place during the time of the Clone Wars, Republic Commando casts players in the role of a Republic Special Operations unit as they prepare to lead a team of white armored soldiers across different worlds to investigate disturbances from an unidentified alien threat. As opposed to the adventure elements found in LucasArts' Jedi Knight series, Republic Commando emphasizes military combat not unlike Tom Clancy's Ghost Recon, albeit in a futuristic setting. Players will arm themselves with an array of high-powered weapons and use their computer-enhanced visor displays to coordinate attacks, issue commands, and reposition the group to neutralize the potentially hostile threats encountered during missions. The game makes use of Epic Games' Unreal technology to deliver a dynamic environment as seen through the eyes of an elite clone trooper.
In single player mode, the player and squadmates do not die when they run out of health, but rather are incapacitated. If the player character is downed, the player can order the squad members to attempt to revive the player or to continue with their current orders. Therefore, the game is only truly over when the player and all members of the squad are incapacitated at once. While reviving a downed commando restores a small amount of health, bacta charging stations are necessary to fully regain it.Republic Commando maintains a first-person perspective throughout the game, presenting the story from the eyes of Delta 38.
Buy For: $19.99 - $19.99
Condition: [BRAND NEW/SEALED] "US Retail" JEWEL CASE EDITION: As Pictured
Availability: Usually Ships within 24 to 48 Hours
Eligible for FREE tracking & delivery confirmation