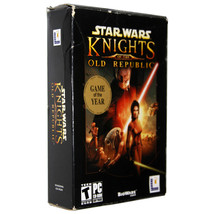 Star Wars: Knights of the Old Republic [PC Game] added to cart. Only one available in stock

The first role-playing game based in the Star Wars universe finds players controlling a three-party team from a third-person perspective. The setting takes place 4,000 years before the first Star Wars film, where the Jedi and Sith number in the thousands and are involved in a war that could upset the balance of the Force. Players choose from a variety of races before they begin, including humans, droids, Wookiees, and Twil'leks, with classes in Bounty Hunter, Scoundrel, Jedi Guardian, Scout, and Soldier.

The journey will span ten worlds as players ultimately decide on a path of good or evil, from the confines of the Jedi Academy on Dantooine to the forests of Kashyyyk, the Sith realm of Korriban, and the desert planet of Tattooine. BioWare moves away from the interface used in the Baldur's Gate series to create a new turn-based combat system using the 3D engine. Mini-games include riding on a swoop bike, battling from behind a gun turret, and other events that offer players a diversion from the main storyline.

From the Manufacturer: The role-playing game from veteran developers Bioware is set in the Star Wars universe, but some 4,000 years before the events of the movies. Players get to use a lightsaber or two, train as a Jedi Knight and choose which path of The Force they want to follow: the honorable Light Side or the passionate Dark Side. The hybrid combat system combines turn-based and action elements into a totally new style of gameplay: slow enough to let players soak up the details of the story, but not bogged down by pointless quests or collection tasks. Most quests are optional, but the required missions are full of action and adventure so players are up to their lightsaber in fun.