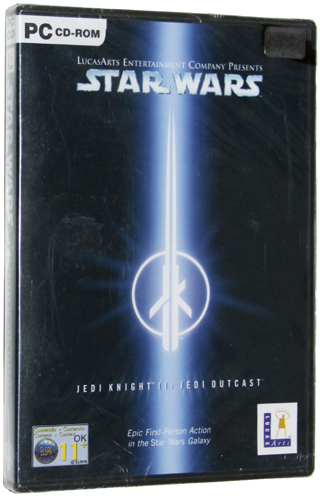 From acclaimed developers Raven Software comes the sequel to the third-person adventure title Jedi Knight. Taking place several years after the first title, the game's protagonist Kyle Katarn has forsaken the Force, for fear of succumbing to the lure of the Dark Side. As a new threat to the galaxy emerges he is forced to once again take up arms and make use of the power that almost destroyed him. Having allowed his powers to languish over time, Kyle can initially only make use of standard weapons, which include the blaster, stormtrooper rifle, and bowcaster. Soon however, he is able to wield a lightsaber; the Jedi weapon of choice.

With it, Kyle is able to deflect laser shots and deal out considerable damage in melee combat. It can even be thrown at distant enemies. As you progress through the title, Force powers such as those made famous in the movie trilogy are learned and include: Jump, Push, Pull, Speed, Heal, Grip, Mind Trick and Lightning. Morale also plays a significant role in the game. A group of enemies without their commander will be reluctant to fight a Jedi, and some may even flee. Attacking with a projectile weapon for example, will be far less intimidating than liberally using your Force powers and lightsaber.