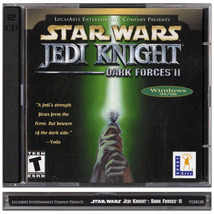 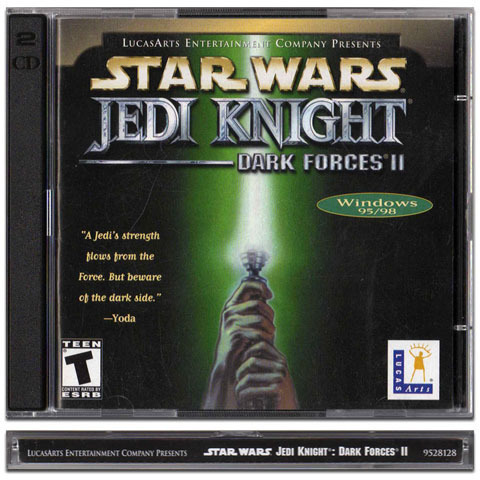 The highly anticipated follow-up to Star Wars: Dark Forces, Star Wars: Jedi Knight -- Dark Forces II once again places you in the role of Kyle Katarn as he quests to become a Jedi Knight. Through each of the 21 mission-based levels, you'll battle new enemies as you fight your way to a Dark Jedi named Jerec who aims to gain the power of the Valley of the Jedi. As you progress, you'll learn to use the Force as your ally and must eventually make an important decision: do you adopt the powers of the light side or follow the quick and easy path to power as an agent of evil? Your fate is in your own hands.

Throughout your adventure, you'll acquire up to ten weapons and learn eight of 12 possible Force powers. The abilities of speed, jumping, pulling weapons from enemies and determining where your enemies lie are available to all, but the other eight depend upon whether you choose the light side or the dark. Followers of light can heal themselves, use the Jedi mind trick, blind evil beings and absorb the strength of others. The dark side, however, allows you to utilize the Force throw, choke an enemy from a distance, shoot lightning bolts and even destroy every enemy onscreen!

The story of Jedi Knight is told via actual actors in full-motion video cut-scenes between missions. There are two possible outcomes, each depending on which ultimate destiny you choose. An agent of good will aim to defend the Valley of the Jedi from Jerec, while choosing the dark path means fighting him over its limitless power.

When you wish to take a break from the story, you can test your skills against up to seven other Force-proficient beings over the Internet for multi-player action. To get started, you must customize your warrior by choosing from a variety of lightsaber colors and assuming one of many types of identities, ranging from Tusken Raiders to protocol droids like C-3PO. You also earn rank as you gain experience so that your competition remains at your relative ability.