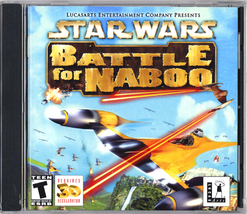 Star Wars: Episode 1: Battle for Naboo [PC Game] added to cart. Only one available in stock 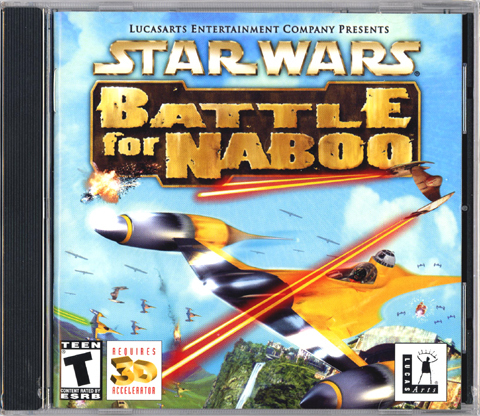 Take to the skies above Naboo and protect the planet from the onslaught of a greedy invasion by the domineering Trade Federation. This is the call to arms in Star Wars: Episode I: Battle for Naboo. Though most of the action takes place in a fighter or defense vehicle high above the Naboo landscape, story animations and ship selection options take place in 3D-rendered scenes on the planet's surface.

In many aspects, Battle for Naboo follows in the worthy footsteps of the classic Star Wars: Rogue Squadron, designed to offer fast, furious dog-fights in the planet's atmosphere with an action-oriented, arcade style of play. A storyline set in the Episode I time frame helps this title to stand out from its predecessor, as well as the larger areas for battle -- some up to five or six times the size of those found in the Rogue Squadron games.

From the Manufacturer: Star Wars: Battle for Naboo (PC Games, 2001) Star Wars: Battle for Naboo is a popular flight action game. Players leap into a variety of vehicles and traverse a wide range of environments while clashing with numerous Trade Federation enemies, such as battle droids, droid starfighters and AAT's in more than fifteen compelling levels. Experience new and familiar Star Wars locations while engaging in air-to-air, ground-to-ground, space and air-to-ground battles.

Special Features: Battle for Naboo have Star Wars weapons and crafts; 16 levels on land, sea, and air; Combat scenarios include air to air, ground to ground, and air to ground battles; Contains an original storyline;