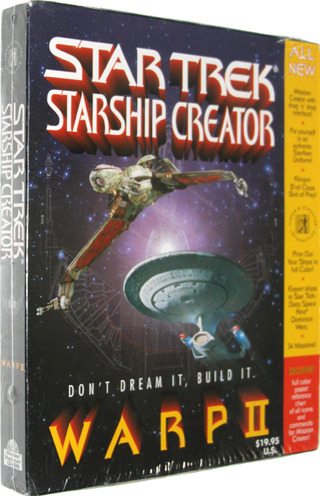 In this combination starship and mission builder, you, as an admiral in the Federation, can choose from seven different classes of starships: Sovereign, Defiant, Constitution, Galaxy, Intrepid, Akira, and the Klingon B'rel Bird of Prey. The game includes all of the features found in the original Star Trek: Starship Creator and the Star Trek: Starship Creator Deluxe titles and features enhancements and backwards compatibility.
New features include a mission creator with drop-and-drag flowcharting, the ability to send out two ships instead of one on cooperative missions and ten new scripted missions, three of which were written by author Peter David with Kathleen O'Shea, bringing the total mission count to 34. Import your own photo into the game and become a member of the starship crew. Star Trek: Starship Creator -- Warp II also offers the ability to export your ships and crew into Star Trek: Deep Space Nine -- Dominion Wars, scheduled for release for the PC in the fall of 2000.
In the area of battles, enhancements include conflict resolution based on shield and weapon strengths of the combatant ships -- destroy your enemy's shields first and win. All ships, including enemy, have unique properties and strengths that can be defined during the scripting of missions you design. Automatic selection of the best weapons available now occurs during conflicts, and fire animation between battling ships is automatically displayed.
In design mode, there are a dozen new star field backgrounds, 15 new enemy ship icons, 12 new planets, and over 30 QuickTime action video inserts straight from the television series. An option is provided to direct Star Trek: Starship Creator -- Warp II to recognize (update) and import other starship classes not included in the game from other Star Trek CD-ROM products.
The mission design manual is printed on a 3' x 4' poster that contains the Star Trek Mission Creator Command Guide on one side with the available drop-and-drag icons completely defined. The instructions are printed upside down on the reverse side so that lifting the bottom of the poster will allow reading of the text. Full-color print support is offered for those who want to print the results of their starship designs.
Buy For: $19.99 - $19.99
Condition: [BRAND NEW][SEALED] "US Retail" LARGE boxed copy: As Pictured
Availability: Usually Ships within 24 to 48 Hours
Eligible for FREE tracking & delivery confirmation