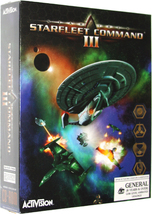 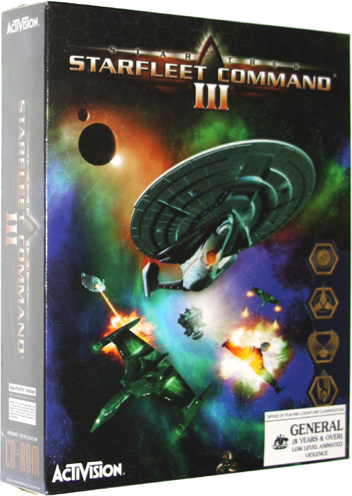 Based upon the Starfleet Battles tabletop game, Star Trek: Starfleet Command III is the first title from developer Taldren to be set within The Next Generation universe. Taking place on the outskirts of the Neutral Zone, players are cast into the middle of a tense peace accord between the Federation and the Klingons. The story arc draws three factions into the fray, namely, the Klingons, Romulans and the Federation, each of which has a unique campaign associated with it. Although excluded from the story-based scenarios, the Borg are playable in the game's Conquest campaigns.
The three races all make use of technology and strategies inherent of their species and with which many fans of the series will be familiar. The Klingons for example, have a versatile Frigate-class craft known as the Bird of Prey, which is capable of cloaking itself during battle. Klingon ships also forego luxury amenities in lieu of increased armor and greater weapon capacity. The title offers 28 different vessels dispersed among the four factions: Federation supporters can commandeer the Saber, Norway, Defiant, Intrepid, Akira, Excelsior, Nebula, Galaxy, or Sovereign; the Klingons have at their disposal the B'Rel, K'Vort, K'Tinga, Fek'Lhr, Vor'Cha, and Negh'Var; the Borg offer Pyramid, Diamond, Sphere, or Cube craft, with Prime variants of the first three; and lastly, the Romulans pilot the Talon, Falcon, Shrike, Hawk, Raptor, and Warbird.
Two multiplayer modes are offered: a skirmish mode in which players can customize various settings and mission types to their liking and a semi-persistent online mode in which players take part in a massive world established within the Dynaverse 3 setting. Here, players are given a small ship and newly trained crew and must complete missions in order to earn prestige and gain in stature. Additionally, players can join with others to form large fleets of vessels with which to scour the galaxy.
Buy For: $189.99 - $189.99
Condition: [BRAND NEW][SEALED] "Retail" LARGE boxed copy: As Pictured
Availability: Usually Ships within 24 to 48 Hours
Eligible for FREE tracking & delivery confirmation