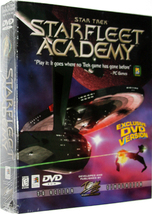 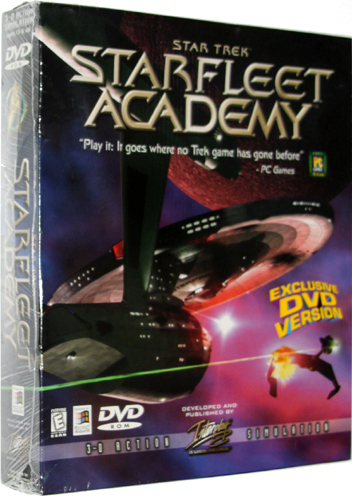 $10.60 via USPS Priority Mail (2 to 3 business days) to United States
Quantity Available
Only one in stock, order soon
Return policy
Returns Not Accepted
Share this page:

The simulation uses a great deal of full motion video in the introduction and cut scenes. It teaches the rudimentary flight pattern of a brand new, shiny, starship. The cadet learns the basics of spaceflight, including the options available on the bridge, and then undergoes training missions to retrieve objects in space, save innocent craft, and eventually engage in dogfights with Klingon Birds of Prey and Romulan battle cruisers.
The game also has lessons in Starfleet protocol. Promotions and awards available and Admiral Kirk (played by William Shatner always rewards outstanding performance in these tests for officer material.
From the Manufacturer: Congratulations! You have been accepted into the Federation Academy's to train for the most prestigious position: captain on a starship. Your training will be watched by the legendary Capt. Kirk and Ensign Sulu themselves, so make sure you don't lose your mind as you direct your crew into piloting one of three capital starships in the 20 simulator missions, while altering crew morale via multiple-choice FMVs.
Special Features: Work your way from Cadet to Captain; 20 simulated missions; wide variety of tasks to perform; take the helm of five Federation starships; switch sides and control alien ships as well.
Buy For: $89.99 - $89.99
Condition: [BRAND NEW][SEALED] "US Retail" LARGE Boxed copy
Availability: Usually Ships within 24 to 48 Hours
Eligible for FREE tracking & delivery confirmation