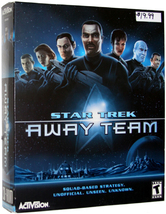 Star Trek: Away Team [PC Game] added to cart. Only one available in stock 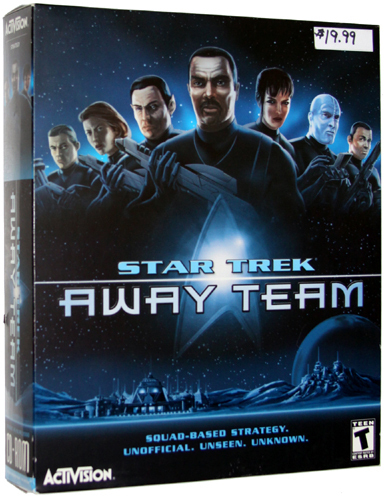 Star Trek: Away Team is a squad-based adventure game, the first set in the Star Trek universe, and takes place during The Next Generation era. The Away Team is charged with defusing potentially volatile issues before they come to fruition.

Starfleet Command is uneasy, as the number of battles and distress calls escalate within the Klingon Empire. In an effort to determine the threat to the galaxy's political balance, the newly formed Away Team is commanded to investigate the situation, using the holographic powers of the starship Incursion. Commander Data, technical advisor, accompanies a team of 17 officers, including command, medical, and security personnel. Three engineering and four science officers complete the roster from which one to six team members are chosen per mission.

The style of gameplay and the interface is reminiscent of Commandos or X-COM, as action is viewed from a fixed isometric perspective. The game's real-time progression can be paused at any time to issue detailed commands to the team members during missions and combat. A wide array of weapons, ranging from phasers and concussion grenades to proximity mines and anti-matter charges are available. Eight specialized pieces of equipment, six skills (including the Vulcan Nerve Pinch and Enhanced Mind Meld), and a variety of enemies (Borg, Klingons, and Romulans) round out the mission-based title. Multiplayer support for cooperative two-player action is provided via LAN.

From the Manufacturer: This action/tactical game is set in the Star Trek: The Next Generation universe and gives players a chance to control an away team of Federation officers on various missions. As captain, the player controls a Special Forces unit of 22 highly trained specialists recruited by Starfleet for their unique combat, stealth and problem solving abilities. Individual team members are comprised of three to six specialist, chosen by the player at the start of each mission. As in the series, the commando team will have access to standard Starfleet equipment such as tricorders, phasers, hyposprays and phaser rifles as well as a number of other unique classified special issue items. The game is played from a 3/4 isometric perspective.