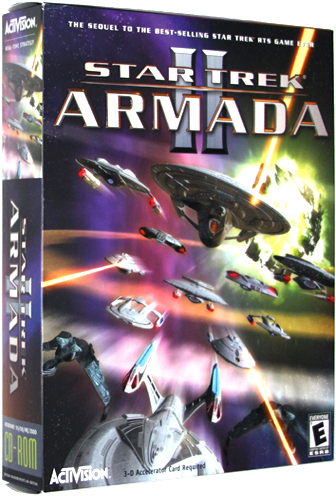 In this sequel to Star Trek: Armada, trekkers and strategy gamers lead the Federation, the Klingons, or the Borg in single-player missions featuring interstellar exploration and fleet combat. Each race has a specific agenda: the Federation needs to eliminate the Borg from the Delta Quadrant, Klingons act as peacekeepers in the Alpha Quadrant, and the Borg try to maintain their collective. Multiplayer games add races such as Romulans and Cardassians to the mix. Battles are planned tactically from a top-down perspective, then played out in real-time 3D.

In Instant Action mode, you select one of six races (including Species 8472), choose the area and resource level, then prepare battle plans to exterminate all other players. Multiplayer action on the Internet (GameSpy) or a LAN offers players the option of playing a regular game or engaging in Capture the Flag, Alliances, Collect Latinum, Colonize Planets, Defend Planets, or Assault modes.

Star Trek: Armada II objectives require you to manage unit attacks, repair and re-crew, patrol, scout, search and destroy, guard, build, or trade. Building requirements include freighters for moving resources, construction, repair, and colony ships, and combat vessels ranging from a Galaxy-class Federation ship to a Species 8472 battleship. To collect material resources, mining stations, orbital processing facilities, trading stations, shipyards, research facilities, science stations, and turrets (for protection) have to be created. Map objects include six types of planets, nebulae, and wormholes, all of which can help or hinder your missions.