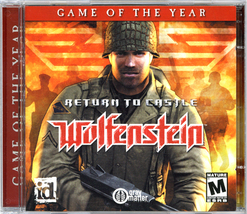 Return to Castle Wolfenstein: Game of the Year Edition [PC G added to cart. Only one available in stock 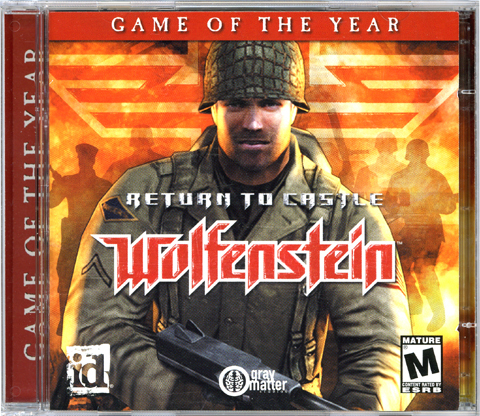 Developed by: Gray Matter Studios - Activision (2002) - First-Person Shooter - Rated: Mature
Coming a full 20 years after the original Castle Wolfenstein and nearly a decade after the first groundbreaking 3D sequel, Return to Castle Wolfenstein updates a computer gaming landmark for a new generation of players. In this release, Nazi-bane B.J. Blazkowicz makes his return to a Castle Wolfenstein that is rendered in full 3D with state-of-the-art graphical effects, created by a special version of the Quake III Arena engine.
As in earlier editions in the series, this first-person shooter is set during World War II and takes place deep in the heart of a remote castle that serves as a Nazi stronghold. In the role of B.J., the player becomes involved in a violent adventure of deadly warfare and forbidden occult practices. Utilizing many of the technological advances developed since the release of earlier Wolfenstein games, this sequel is designed to create environments that are as engagingly interactive as possible.
The Game of the Year edition includes seven new multiplayer maps (also available for free download over the Internet), a full version of Wolfenstein 3D, a behind-the-scenes look at Return to Castle Wolfenstein's development, and new packaging.
Return to Castle Wolfenstein: Game of the Year (PC Games) Special Features: Epic environments; team-based multiplayer action; fearsome firepower; intense story driven action.
Buy For: $14.99 - $14.99
Condition: [LIKE NEW] "US Retail" Jewel case edition (as pictured) 100% complete & in mint condition
Availability: Usually Ships Within 24 to 48 Hours
Eligible for FREE tracking & delivery confirmation