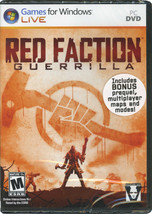 Red Faction: Guerrilla [PC Game] added to cart. Only one available in stock 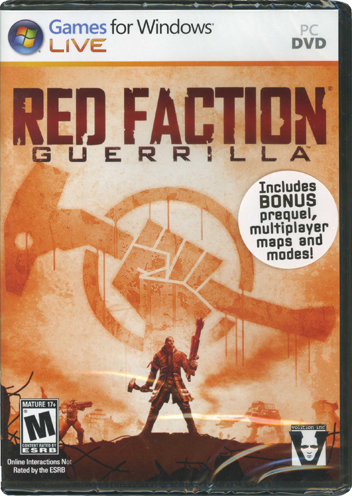 Red Faction: Guerrilla is a shooter that eschews its series predecessors' confined paths and first-person view in favor of a third-person perspective set in a vast open-world landscape. One thing the series hasn't changed, however, is its revolutionary tone. The original Red Faction found gamers rebelling against a corrupt Martian mining corporation, Red Faction II saw players back on Earth taking down a totalitarian regime, and Red Faction: Guerrilla finds gamers rising up again, this time against an Earth Defense Force (EDF) that has grown corrupt in its occupation of Mars. Players assume the role of Alec Mason, a young man who, much like Red Faction's protagonist Parker, came to Mars to work as a miner, but soon found himself in the middle of a proletariat insurrection.

As Mason, gamers can freely explore six zones of an expansive Martian landscape, ambushing EDF convoys, joining fellow revolutionaries, attacking military outposts, and exploring mines, industrial compounds, and thriving cities. Players can use an array of different weapons, from futuristic military fare like nano-rifles to improvised armaments like arc welders, and a variety of machines, such as armored personnel carriers, tanks, and mining excavators, can be hijacked and used against the enemy. The "Geo-Mod 2.0" engine expands on the series' acclaimed emphasis on destructible environments, allowing gamers to systematically destroy any man-made object, from bridges, to huts, to towering skyscrapers. Red Faction: Guerrilla also puts its destructive engine on display in several different multiplayer game modes, including "M.A.Y.H.E.M.," "Fall Guy," and "Rampage."