Knights of the Temple II [PC Game] added to cart. Only one available in stock 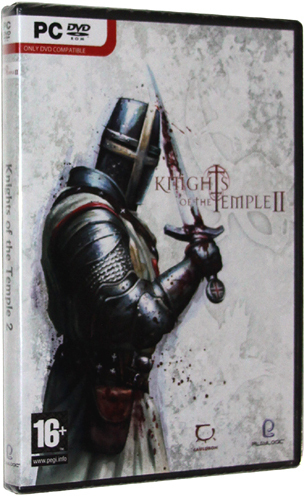 After saving the distressed damsel in the original Knights of the Temple, Paul de Raque is back for another round of adventuring in Knights of the Temple II. Facing the forces of Hell, Paul must explore the kingdoms and environments of 13th century Europe as he defends humanity against the hordes of oncoming evil while attempting to uncover the secrets surrounding three different artifacts. Gamers will navigate de Raque through such landscapes as a forgotten Roman city, the dungeons of Saracen, deserted islands, catacombs, and an underwater fortress.

The non-linear gameplay allows players to complete Knights of the Temple II on their own terms, taking on side quests and the main storyline when they wish. This style of play and the player's decisions determine how the game ends. Throughout the story gamers will interact with a variety of non-player characters to gather information, items, and missions. Players may also adventure with friends using multi-player characters that can be upgraded in the same fashion as de Raque.

From the Manufacturer: In Knights of the Temple 2 players will join the ultimate battle of Paul de Raque, Grand Master of the Order of the Temple, against the forces of Hell. Travelling the lands and kingdoms of 13th century Europe, Paul must unveil the secret of three mysterious ancient artefacts and fight the demon armies attacking our world. Fight your way through a forgotten Roman city, deadly dungeons of the Saracen empire, discover long forgotten islands, ruins and catacombs on a search for a secret hidden on the ground of an ancient underwater fortress. Test your fighting skills, overcome the hordes of darkness and discover that victory must be paid with blood, pain and even your very own soul.