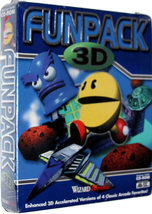 Fun Pack 3D [PC Game] added to cart. Only one available in stock 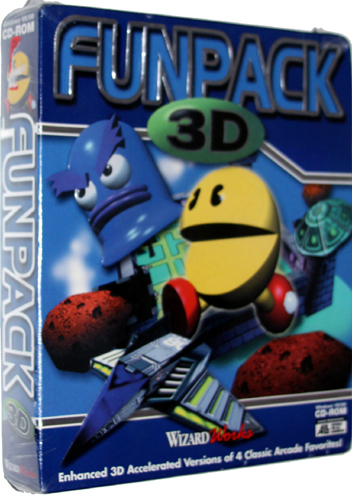 This follow-up to the FunPack contains 3-D adaptations of four of the games from that earlier product. While the originals were licensed versions of Freeware/Shareware titles, these are all original creations available only in this collection.

Chomper 3D - Inspired by Chomp, this is a dot-munching, maze-racing game in the Pac-Man vein featuring all the usual characteristics -- monsters made vulnerable by power dots, fruits worth bonus points and multiple mazes to explore. The third dimension doesn't change things a whole lot, but it is possible to view the action from five different camera angles.

Missile Defense - Adapted from Warheads for Windows, this is Missile Command from a first-person perspective. The arrow keys rotate the view from the gun platform while the mouse directs defensive fire used to destroy attacking missiles and planes.

Super Brick-Breaker - Like Block Breaker, this is a ball-and-paddle game in which bricks need to be broken in order to clear levels. Four different camera angles are provided, and the paddle can now move in two dimensions rather than only one. Various power-ups are available to diversify gameplay.

Meteor Gunner - This Asteroids clone, here in place of Hyperoids, has the usual mix of alien spaceships and breaking rocks to shoot at, but it changes the scale a bit, leading to a feel somewhat reminiscent of Wing Commander. The camera can be positioned either in the cockpit or just outside the player's spaceship, but either way, the screen only ever displays a relatively small part of the action at a time, and it takes a bit of flying around to clear everything.

From the Manufacturer: Four of the greatest arcade games of all time hit the PC screen, now as fully enhanced 3D accelerated versions! These games fully utilize today’s technology while staying true to the spirit that made them so fun and addictive to play. Hold on to your seat, because it’s going to be a wild 3D ride.

Availability: Usually Ships Within 24 to 48 Hours