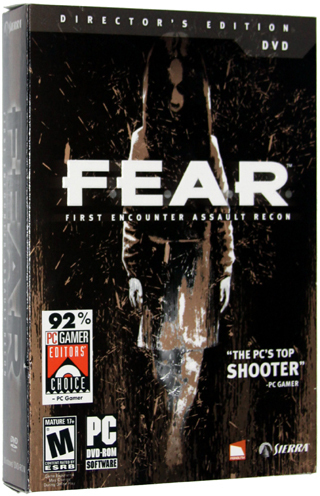 Developed by: Monolith Productions - Sierra Entertainment (2005) - First-Person Shooter - Rated: Mature
F.E.A.R. -- or "First Encounter Assault and Recon" -- is a first-person shooter set in a secretive complex full of government intrigue. Players take the role of a member of an elite squad of soldiers that's called in when conventional troops have failed. One such situation occurs when an unknown force infiltrates the complex, and the first strike Special Forces team sent to quell the invasion was decimated minutes after arriving on the scene. Now it is up the F.E.A.R. squad to isolate the invaders and eliminate them, before anyone else gets hurt (or any multibillion-dollar government equipment is lost).
The game's realistic, near-future setting and storyline feature elements of horror, supernatural vision, and even philosophical insight. The lead character is not given a name, in order to encourage the player to more fully assume the role, but well developed teammate characters are designed to bring a personal context to the adventure. Enemy artificial intelligence is designed to produce believable human characters, as well, who work together as a deadly efficient, reactive team.
In addition to the single-player game, popular multiplayer modes such as Deathmatch, Elimination, and Capture the Flag are available. The Director's Edition of F.E.A.R comes on a single DVD disc, which includes a "Making of" video, candid footage of developer discussions, and a machinima short, along with a complete copy of the full game.
From the Manufacturer: A special director's edition of Monolith's terrifying PC FPS. Included is a Dark Horse comic, a behind-the-scenes documentary, videogame commentary, the Machinima Movie Series, and the live-action F.E.A.R. "prequel" short film.
Buy For: $9.99 - $9.99
Condition: [LIKE NEW] "US Retail" Mini boxed copy (100% Complete & in mint condition
Availability: Usually Ships within 24 to 48 Hours
Eligible for FREE tracking & delivery confirmation