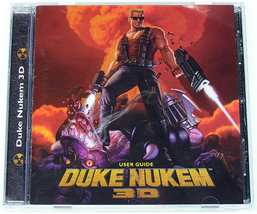 Duke Nukem 3D [PC Game] added to cart. Only one available in stock 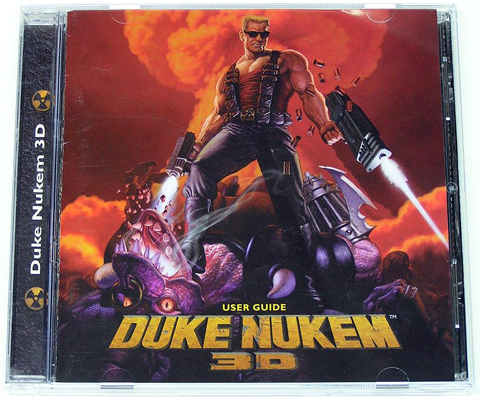 Blond, buff, and brazen Duke Nukem moves from side-scroller to first-person shooter with Duke Nukem 3D. The action begins in a futuristic Los Angeles, which has been decimated by an alien invasion. To save his cherished planet, Duke vows to kick some posterior and chew gum -- and he's all out of gum. What follows is a tongue-in-cheek shooter filled with offbeat weapons, cheesy one-liners, and numerous pop culture references. Over the course of three chapters and 28 levels, Duke will battle aliens and mutants on city streets, in outer space, and everywhere in between.

Belying its title, the game does not feature a true 3D graphics engine. Instead, Duke Nukem is populated with sprite-based enemies lurking throughout 2D environments designed in a way to resemble three-dimensional space. Notable features include bullet holes appearing in walls, destructible furniture, and interactive objects such as phone booths, toilets, pool tables, security cameras, and arcade games. Each level also contains secret rooms and passages waiting to be discovered.

Duke Nukem can attack enemies with one of ten weapons, or if he runs out of ammo, perform a swift kick with his mighty foot. Among the more noteworthy armaments are pipe bombs, laser-activated trip bombs, plasma cannons, shrinkers, and expanders. Shrinkers reduce enemies to a fraction of their size, while expanders inflate enemies until they explode. In addition to the single-player campaign, Duke Nukem 3D offers cooperative as well as competitive action for up to eight players. Also included with the game is a built-in editor for designing custom levels.

From the Manufacturer: Assume the role of Duke Nukem, arguably the most recognized and most beloved character in the 3d game genre! Travel in deserts, duke it out in movie theaters, and toughen it up (in all senses) in the red light districts! This is the first game to be widely acclaimed as the definite Doom-killer, and it well deserves the honor. Bringing to you beautifully realistic environments, goofy monsters, and a kickass arsenal of creative weapons, Duke Nukem 3D will leave you gasping for more steroids. Shoot, blow up, shrink, or freeze your enemies, and bring them their ultimate destruction! A true classic.