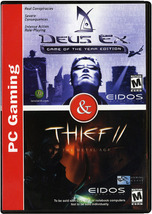 Deus Ex: Game of the Year Edition [PC Game] added to cart. Only one available in stock 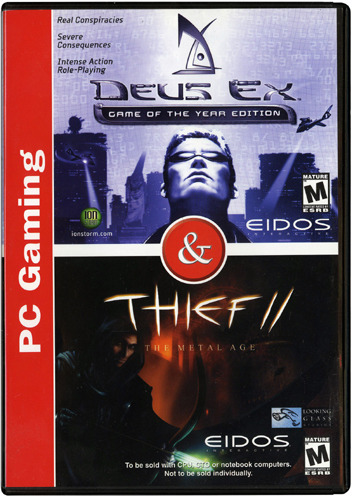 The genre blending mix of first-person shooter action and non-linear, interactive story development helped to win Deus Ex the honor of being named 2000's Game of the Year by more than a few online and printed gaming magazines. Those who missed this title the first time around get another chance with this special reissue of the critically acclaimed adventure.
In addition to the latest "patched" version of the game, Deus Ex: Game of the Year Edition offers a few new features. Although the original game was designed to provide a deep, engaging single-player experience, many gamers bemoaned its lack of any multiplayer support. This reissue "corrects" that omission by adding multiplayer capability and it also includes a design kit that allows players to create their own multiplayer levels and arenas.
From the Manufacturer:  This Game Of The Year of the smash hit Deus Ex features an all-new multiplayer mode, a new head-to-head deathmatch mode, and a remixed soundtrack CD with more than 30 of the best tunes from the game. Also included is a software development kit, so you'll be able to create both single and multiplayer missions from scratch, as well as modify existing ones.
It's the new millennium. Civilization is near collapse. The world economy is in chaos. The middle class no longer exists. Deadly viruses have ravaged the earth?s population. Terrorism runs rampant. From this maelstrom of violence and suffering an ancient conspiracy bent on world domination emerges from the shadows of legend. The conspirators' greatest strength? No one believes they exist. No one but you.
Buy For: $14.99 - $14.99
Condition: [LIKE NEW] "US Retail" Mini boxed copy w/Bonus Game: 100% complete: As Pictured
Availability: Usually Ships Within 24 to 48 Hours
Eligible for FREE tracking & delivery confirmation