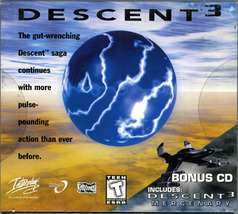 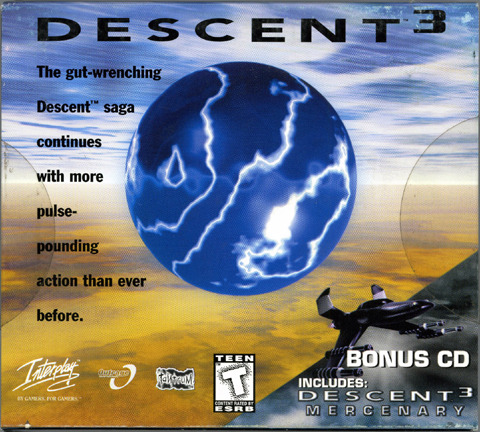 This compilation includes full versions of both Descent 3 and its expansion pack Descent 3: Mercenary.

Descent 3 (PC Games, 1999) Description: Part 3 in the vehicular first-person shooter series. Descent 3 starts off right where the warp-core exploded in Descent II. You miraculously survived the incident, only to be left floating in space, unconscious, headed right towards a sun. A PTMC mining ship snatches you just in time, but not for free. At the price of saving your life, you now have to endure some of the same duties you had to do in the first two Descent adventures, but with a whole lot more going on. Eradicating enemy mining bots is one of your goals, but your mission also includes the investigation behind the virus causing the malfunction of the mining bots' AI. Features 15 levels, 20 weapons, 30 new robots, and the ability to travel inside structures and on the surface.

Descent 3: Mercenary (PC Games, 2000) Description: An expansion pack to the popular first-person vehicular shooter, Descent 3 Mercenary builds upon the existing backdrop of the award-winning Descent 3 universe. Centered around the dark conspiracy revealed in Descent 3, Mercenary has you flying as the leader of the Black Pyros hired by Dravis to carry out his evil plans. The new seven-level, single-player minicampaign features highly scripted, detailed environments. Additionally, Mercenary sports five new multiplayer levels created by developer Outrage and a variety of the best single- and multiplayer fan-made levels. An included level editor lets anyone create their own stages and share them over the web. Requires full version of Descent 3.