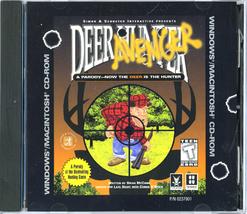 Deer Avenger [PC/Mac Game] added to cart. Only one available in stock

Developed by: Hypnotix, Inc - Simon & Schuster Interactive (1998) - Sports - Rated: Teen
A parody of the popular game Deer Hunter, Deer Avenger puts you in the role of the deer -- and it's his turn to take a little vengeance on the pesky humans who seem to come after him each fall. You have a choice of three weapons when you're hunting your redneck prey: the M-16, the bazooka, and the slingshot, which uses "special deer pellets" (hard or soft deer poop).
There are three hunting areas in which to track your prey, including springtime in Connecticut, snowy Minnesota in the winter, and West Virginia during the fall season. After entering each hunting area, a map screen pops up. An arsenal of "stalking devices" is available and includes such goodies as deer farts (to "smoke" out your prey), inoculars and scoped rifles, and over a dozen "hunter calls," such as "Free Beer Here," or "Help, I'm naked and I have a pizza!"
To begin the hunt, you'll move a "sighting" circle around the map screen until a telltale hunter trace appears. These can be items such as beer cans, adult magazines, and other paraphernalia to help you pick up the trail. In most cases a hunter will be near by -- blow him away and you'll get to mount his head on your wall.
There are seven different hunters; collect them all to become a bona fide Deer Avenger! Deer Avenger was written by Brian McCann, staff writer for Late Night with Conan O'Brien
From the Manufacturer: Deer against human! from Simon & Schuster. It's time for the deer to get revenge against the human! Heads up hunters-this deer is packing heat! It's payback time and deer hunters everywhere are going to get what's coming. With special weapons, hunter stalking devices, and favorite hunting locations you are the meanest stag in the forest. The season never closes and big-belly trophy hunting has never been better.   The deer that used to hang on the wall as a decoration is now out for revenge!  It's show time...let the hunting begin!
Buy For: $19.99 - $19.99
Condition: [LIKE NEW] "US Retail" Jewel case edition, 100% complete & in mint condition
Availability: Usually Ships within 24 to 48 Hours
Eligible for FREE tracking & delivery confirmation