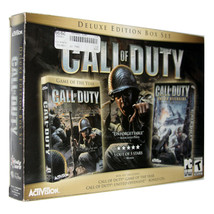 Enlist in Activision's critically acclaimed WWII franchise with this special collection designed for new recruits. The deluxe box set includes 2003's Call of Duty, the BradyGames strategy guide, and the official soundtrack. The original Call of Duty features some of WWII's defining battles, including D-Day, The Battle for Berlin, and Stalingrad, in a series of 24 missions spanning eight countries. One of the highlights of the franchise has been its shifting focus on everyday soldiers fighting for different countries, and players will be able experience the chaotic battles from the vantage points of a Russian tank commander, an American paratrooper, and an operative for the British Special Forces.

From the Manufacturer: Call of Duty (Deluxe Edition) (PC Games, 2005) A compilation pack of the original Call of Duty (in its full Game of the Year edition, complete with its new multiplayer modes, maps, EAX 3 sound support, and mapmaker), plus the acclaimed sequel, Call of Duty: United Offensive.