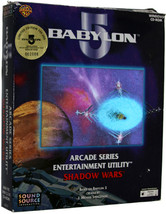 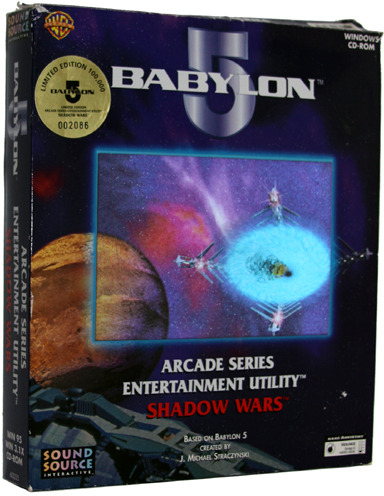 Developed by: Sound Source Interactive - Simon & Schuster (1997) - Trivia - Rated: Everyone
The Babylon 5: Arcade Series Entertainment Utility--Shadow Wars is not only a massive desktop theme library for the epic science fiction television series Babylon 5, but also doubles as a multiple level 3D Arcade shooter. The game allows you to pilot a Star Fury against a variety of classic Babylon 5 enemies.
Using a graphic interface, choose from a library of over 25 full-motion video clips, 75 full-screen images, and 70 audio clips (3D sound). Spice up your PC's desktop with B5 wallpaper, screensavers, new icons, cursors, and audio clips of ambient sounds, character dialog, and more. The bulk of the images and sounds showcased in this utility/game are from season three and four of the five-year Babylon 5 series.
The first 50,000 copies of the Babylon 5: Arcade Series Entertainment Utility--Shadow Wars have a limited edition 4" x 6" Lenticular enhancement on the cover of the box. A beautiful Vorlon transport ship cruises through a Jump Gate if you move the box. Just like the Babylon 5: Limited Edition Entertainment Utility, the first 100,000 copies this product also are numbered with a certificate of authenticity. Our game was number 002086.
Buy For: $19.99 - $19.99
Condition: [LIKE NEW] "US Retail" LARGE boxed copy, complete & in good condition as pictured
Availability: Usually Ships within 24 to 48 Hours
Eligible for FREE tracking & delivery confirmation