Aliens [PC Game] added to cart. Only one available in stock 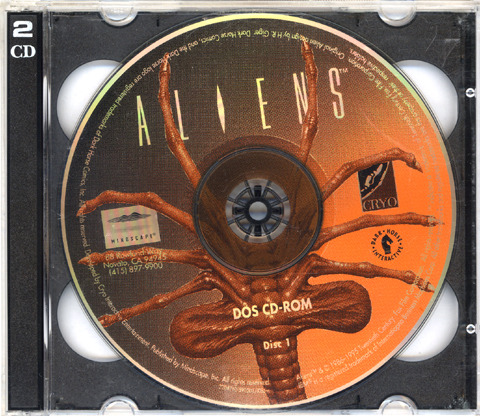 Developed by: Cryo Interactive Entertainment - Mindscape (1995) - Action Adventure - Rated: Teen
Three and a half decades have passed since the Colonial Intelligence Command (CIC) began the first terraforming missions in deep space. Overpopulation and pollution has rendered Earth incapable of supporting the whole human race. The CIC regularly sends crews into space to transform inhospitable worlds into livable, arable planets fit for human expansion. It is now the year 2157 and the crew (a.k.a. "mud farmers") of the USS Sheridan has been awakened from 200 days of cryonic suspension on their trip back to Earth after a terraforming assignment.
Something has gone terribly wrong on Planet B54c, a Class 12 mining colony in Epsilon sector Barnard-234 near Alpha Centauri. The $10M Sheridan control system, MOM (Master Onboard Memory), has picked up an automated Class III SOS and corporate protocol requires investigation by the crew. Not much is known about planet B54c other than that it is primarily inhabited by robots, synthetics, and less than 40 humans. It is up to you to maneuver the four-person crew through their investigation of the planet, find the reason for the SOS, and deal with the situation.
Aliens is a cinematic adventure set in SVGA environments. The game features both a first-person view and a third-person isometric (combat) perspective. All game functions are controlled via mouse input and the game runs only in MS-DOS.
Buy For: $24.99 - $24.99
Condition: [LIKE NEW] "US Retail" [DUAL] Jewel case edition.
Availability: Usually Ships Within 24 to 48 Hours
Eligible for FREE tracking & delivery confirmation