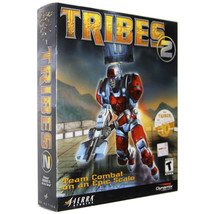 Tribes 2 [PC Game] added to cart. Only one available in stock

Tribes 2 is the follow up to Starsiege: Tribes, a first-person shooter geared toward online-only play released at the end of 1998. Set in the Starsiege universe, Tribes 2 features the same multiplayer team play found in the original with the following modes of play: Capture the Flag, Capture and Hold, Deathmatch, Rabbit, Siege, Bounty, and Flag Hunters.

Games are again aimed at multiplayer online play but there are now computer-controlled players (bots) that allow users to play offline. When going online players simply ping a list of servers and then join a game. Players are expected to work as a team as they attack the enemy while also defending their own base. Tribes 2 features three armor sets -- light, medium and heavy -- as well as a variety of weapons. Those who played the original game will find that the armor sets are the same here with a few slight differences.

Most of the weapons will also be familiar as far as type but many have been modified providing a new result. Another familiar feature will be the air vehicles while something new to all users will be the ground vehicles. The three ground vehicles included are the Wildcat-Class Grav Cycle, BeoWulf Assault Vehicle, and Jericho-Class Mobile Point Base.

Also very much like Starsiege: Tribes, Tribes 2 maps focus on outdoor battles. Each armor comes with a jetpack for increased mobility around each map. However, this time around many of the maps are larger in order to persuade players to work together more often and find more uses for the vehicles. When traveling across each landscape gamers will not only have to deal with the enemy but weather and ground surfaces as well.

Elsewhere, in the star system Ymir, the Starwolf, who are in a war with the Blood Eagle, have brought together the majority of their forces in preparation for an invasion on the Blood Eagle world of Vodanu Mariq II. However, the invasion never takes place as the BioDerms come through a jumpgate taking the Starwolf by surprise and killing close to 150,000 of their warriors, as well as a large number of the civilians and support personnel. A few ships manage to escape but the battle leaves the Starwolf tribe almost completely defenseless.

At this point, Starwolf who claim to be distant kin of the survivors begin entering the wilderzone. Under a new banner they swear vengeance against the BioDerms.