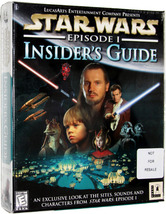 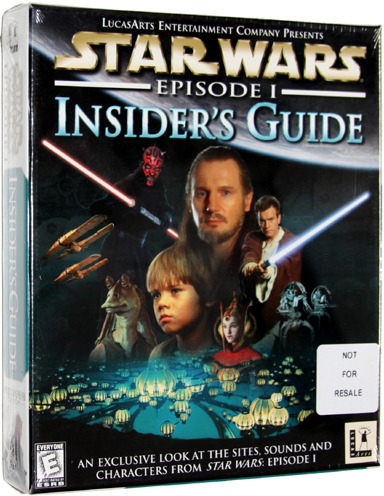 Developed by: LucasArts Entertainment Company - LucasArts (1999) - Trivia - Rated: Everyone
Following up its successful Star Wars: Behind the Magic CD-ROM that provided in-depth information on the original classic Star Wars trilogy, LucasArts has released a very similar disc entitled Star Wars: Episode I -- Insider's Guide. With the avid Star Wars fan in mind, the title focuses solely on the first movie in the prequel trilogy, The Phantom Menace. As with Behind the Magic, fans can learn about the ins and outs of the movie -- its characters, its universe, behind-the-scenes action, etc.
The main menu narrows the Insider's Guide's contents to nine basic categories. The first of the two discs features in-depth looks at characters, technology, vehicles, locations and the movie's promotion (including both theatrical trailers). Meanwhile, the second disc focuses on synopses of the entire Star Wars movie saga (complete with a preview of what to expect in future prequel installments), a look behind the scenes, and an expanded universe section highlighting books, comics and other outside media dealing with the story. Found on both discs is a glossary of terms from the universe of The Phantom Menace, its 500 entries listing everything from Ki-Adi-Mundi's medical droid 2-LOM to Zabrak, the vestigially horned alien species of Jedi Master Eeth Koth.
Some of the more unique features in the Insider's Guide include conceptual art, behind-the-scenes pictures, interviews with the likes of creator George Lucas and producer Rick McCallum and a scene-by-scene script (which even features some dialogue not heard on the big screen). To liven things up a bit, the CD-ROM also consists of such humorous items as an advertisement for Watto's junkyard and a scene in which you, as young Anakin Skywalker, instruct Jar Jar Binks how he can help you around the house (you can imagine the results).
Diehard Star Wars fans should enjoy answering the 400 trivia questions spread throughout the two discs. A running tally is calculated so they can see just how strongly the Force is with them.
Buy For: $19.99 - $19.99
Condition: Brand new, Factory sealed "US Retail" LARGE boxed copy
Availability: Usually Ships within 24 to 48 Hours
Eligible for FREE tracking & delivery confirmation