Star Wars: Behind the Magic [PC Game] added to cart. Only one available in stock 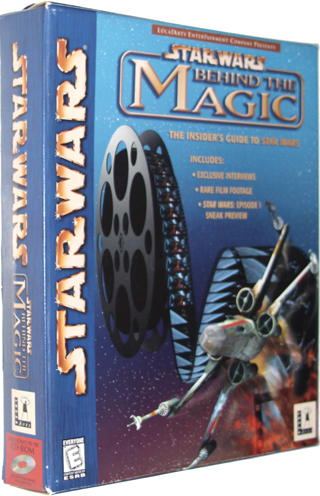 You've seen the movies and read the reference guides, novels and comic books. Now all of that information and more is included on two compact discs. Star Wars: Behind the Magic contains all of the facts, music, video clips, maps and interviews you could want involving the original trilogy of films.

Detailed information is included in a variety of categories: characters, locations, technology, events, behind the scenes, expanded universe (books, comics, toys and other media), and even a sneak peak at Star Wars: Episode I. In all, there are over 2,000 images, 20 3D models, 40 minutes of digitized video, 20 minutes of audio and 30 ship schematics. Many fans will also delight in seeing cut footage from the first film.

Behind the Magic also features added highlights that you won't find anywhere else, including a computer-generated Princess Leia fashion show and a 3D walkthrough of the Millennium Falcon. You can also visit the weapons test facility to compare the power of a lightsaber, blaster, Ewok rock, Death Star superlaser and thermal detonator by trying them out on a Stormtrooper. Then, test your Star Wars knowledge by answering 300 trivia questions placed throughout the two discs.