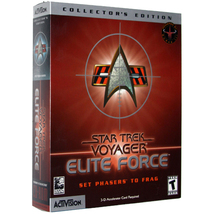 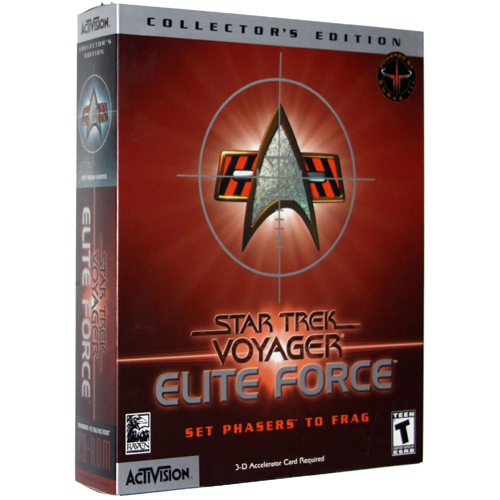 The Collector's Edition of Star Trek: Voyager: Elite Force is a special packaging of the software in celebration of the game's release. In addition to the merchandise and documentation available in the regular package, this version is bundled with extras such as a graphic novel, a Star Trek Voyager lapel pin, and a CD containing game music and artwork.

The Elite Force is a squad of Federation operatives who specialize in security and high-risk situations. In Star Trek: Voyager - Elite Force, players will take on the role of Ensign Munro, a member of this team. Players have the option of playing Munro as a male or female character. The story begins as Voyager shoots down an unusual probe and is then mysteriously transported to a deep space junkyard, full of strange ships and even stranger characters. The Elite Force must investigate.

This first-person shooter is built on the Quake III Arena engine. Munro is joined by her team on missions and though players do not control these other members of the squad, the characters do help accomplish goals and cover one another in combat. This game is primarily a shooter with lots of fast action and aggresive enemies, but continuing plot developments help to encourage a more personal investment in the characters and the story.

Based on characters (uses the voices of the original cast) in the television series Star Trek: Voyager. The game utilizes the Quake III Arena first-person engine, thus, gameplay similarities to that game are evident.

The developer, Raven Software, has a history of creating action titles and shooters including such games as the Hexen and Heretic series, Soldier of Fortune, Mageslayer and Star Trek: Armada.