Star Trek: Legacy [PC Game] added to cart. Only one available in stock 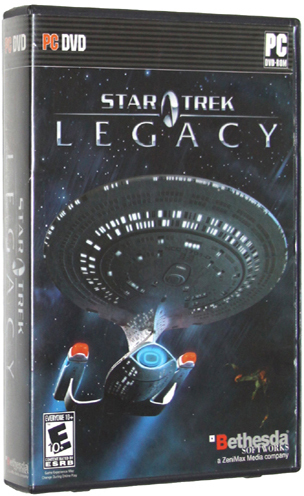 Take charge as commanding officer of the Federation, Klingons, Borgs, or Romulans in Star Trek: Legacy and lead your task force of war ships into intergalactic battle. Featuring the voice talents of William Shatner, Patrick Stewart, Avery Brooks, Kate Mulgrew, and Scott Bakula, the game offers a three-series single-player campaign, or multiplayer action that spans the history of the full Star Trek story beginning with the original series in 1966 and ending with Enterprise in 2005.
Select from over 60 spaceships including the Enterprise, the Borg Cube, the cloaking device equipped Klingon vessel, small scout ships, light cruisers, and more while also choosing a captain and the equipment for battle. Navigate your fleet of up to four ships through nebulas, wormholes, planets, and stars as you avoid or engage the enemy in small two-craft skirmishes or large-scale combat featuring over a dozen ships fighting at one time.
Complete missions and earn command points by taking direct control of your space cruisers or by giving your fleet universal orders. Earned points can be used for upgrades including weapons, shields, engines, or completely new vessels. Options to customize your fleet are included so you can stand apart from other players cruising the online multiplayer environment, which offers both competitive and cooperative gameplay.
Buy For: $29.99 - $29.99
Condition: [LIKE NEW] "US Retail" Mini boxed copy: 100% complete
Availability: Usually Ships Within 24 to 48 Hours
Eligible for FREE tracking & delivery confirmation