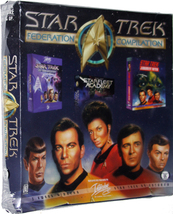 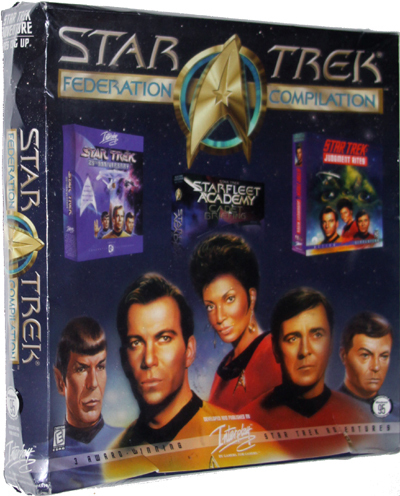 Star Trek®: 25th Anniversary: In Star Trek: 25th Anniversary players take on the role of Captain Kirk who must lead the U.S.S. Enterprise and its crew through eight space and land missions. During gameplay users can access photon torpedoes, control phasers, shields, and communications. Some of the voice talents featured in the game include William Shatner, Leonard Nimoy, DeForest Kelley, James Doohan, George Takei, and Walter Koenig. There are more than 60 characters in the game who combine for more than 6,000 sentences of dialogue.

Star Trek®:Judgment Rites: is a computer game first produced by Interplay in 1993, featuring the original cast of the classic Star Trek in a series of new adventures, including one featuring Trelane, the omnipotent child from the original episode "The Squire of Gothos". Judgment Rites uses the same DOS gaming engine as the earlier Star Trek: 25th Anniversary; however, it had sharper graphics and sound, particularly with the CD-ROM edition.

Star Trek®: Starfleet Academy Cadet Briefing: Getting into Starfleet involves passing a knowledge exam, and also demonstrating your space combat and command skills. It is this side of the Academy which features in this game. You play aspiring captain David Forester, backed by a wealthy and friendly crew: Sturek, M'Giia, Robin Brady and Corin.

The action is similar in style to TIE Fighter, with the action viewed form your cockpit and full flight dynamics in action. Missions include taking on Klingons and Romulans, and dealing with a Vanguard rebellion from within. Before every mission, the briefing is given to you in a lecture style where you can find out what to expect, and reduce the number or surprises. William Shatner and Walter Koenig reprise their Star Trek characters for these.